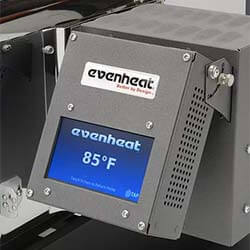 The TAP Controller features a touchscreen design that offers a large screen with full text . All commands and menu items are legible, easy to read and easy to operate. Simply respond to the screen with a touch!

The TAP Controller is supplied pre-loaded with firing schedules as well as allowing the artist to create and store their own custom programs.

On-the-fly features such as adding time to a hold, adding temperature to a hold and skipping ahead are available and easy to use.

A TAP Controller app is available for iOS devices and is accessible using an Evenheat or SDS Industries supplied USB dongle or, if you prefer, an Ethernet connection. The TAP app allows the user to monitor the kiln, develop and edit programs and perform TAP Controller functions from a networked iOS compatible computer, tablet or mobile device.

Touchscreen technology offers many improvements and Evenheat is dedicated to providing this technology to our customers.

All Information Displayed on One Screen

Because the TAP Controller offers a fairly large display screen it is possible to display all firing information on one screen, in full text, while firing. There’s no need to touch the screen and go looking. The display will show your current firing segment or step, current kiln chamber temperature, current programmed rate per hour and hold time. It’s all there at one time and on one screen. We love this feature as it tells us exactly where we are in the firing without having to touch the control.

The Display from a Distance

While programming and using the TAP Controller, screen information is presented in a legible and easy to understand text and font size. While sitting at the Standby position or when running a firing schedule the TAP Controller screen changes to a large font, high contrast display which is easily seen from across the studio or work space. Near or far, the TAP display has you covered.

Feel free to develop your own, custom programs. The TAP Controller makes it very easy and understandable. All firing data is shown on the touchscreen as you develop which makes it very easy to keep your place and not get lost in the process. Your firing data will be shown in a table format and is entirely legible and understandable. This full text feature of the TAP Controller is one of its highlights. All information is available to the eye.

Firing schedules (programs), whether pre-loaded or custom, are sometimes not exactly to your liking or needs. The TAP Controller allows you to modify or edit any stored program more to your liking. Simply choose to edit the firing schedule and make the changes.

The TAP Controller is designed for computer networking via USB Wi-Fi or Ethernet connections. This connectivity allows the user to monitor the kiln, develop and edit programs and perform TAP Controller functions from a network connected computer, tablet or other mobile device using the TAP Mobile App.

A TAP Controller app is available for iOS devices and is accessible using an Evenheat or SDS Industries supplied USB dongle or, if you prefer, an Ethernet connection. The TAP app allows the user to monitor the kiln, develop and edit programs and perform TAP Controller functions from a networked iOS compatible computer, tablet or mobile device.

A unique Wi-Fi dongle is needed for the Internet connection and is available from both Evenheat and SDS Industries.

Add Time to Hold While Firing

During firing, it’s not uncommon that additional hold time may be needed to achieve the desired results. The TAP responds to this desire by allowing you to add any amount of time to the Hold while in progress.

Add Temperature to a Hold While Firing

Skipping Ahead to the Next Segment

You’ll find moments while firing when you would like to stop the process and skip ahead to the next available segment or step (very common in glass firing). The TAP Controller offers a single touch feature that allows just for this. It’s called Skip Ahead. The Skip Ahead feature does what it sounds like: it skips ahead to the next segment. With glass firing, the segment or step right after the fusing or slumping operation is the anneal, which is exactly where you want to go. It’s great feature that allows you to make the glass you want to make.

Evenheat has designed our TAP Controller package for instant, direct access to the USB and ethernet ports. There’s no need to disassemble the kiln to access these ports. These ports are readily accessible from the outside of the Controller package, simply plug in and go. Proper design and execution, it’s what you expect and get from Evenheat.

The TAP Controller monitors many functions, among them is your actual cost per firing. Simply enter your cost per kilowatt hour and the wattage of your kiln. The TAP Controller uses this information to calculate a realistic approximation of the cost of your electrical usage for your firing schedules.

During firing the TAP Controller collects the kiln chamber temperature and creates a visual graph that can be seen with a single touch of the screen. The graph is continually updated every minute for the duration of the firing. This allows the artist to monitor the history of the firing as it takes place. The visual graph is also stored in memory, along with the particular firing data and can be recalled and inspected at any time.

Software updates will be available on a semi-annual or as-needed basis and are downloaded to the TAP Controller via a USB thumb drive, Wi-Fi connection or Ethernet connection. Updating is fast and simple and will give you the latest in features, themes and functionality.

10% off all BELT orders over $150. Enter code ButterballSnowflake during checkout. Dismiss